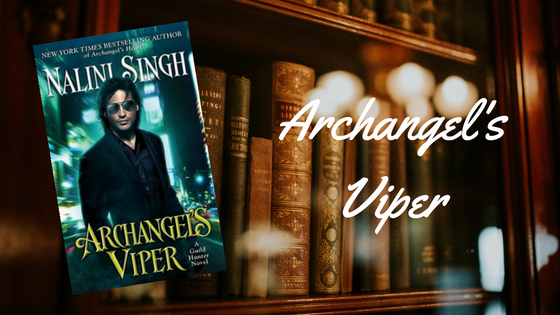 I was so excited for this book to come out. I have been a fan of Nalini’s Guild Hunter series since she published the first one, I love all the characters in each book, and every year I wait patiently for a new one to come out.

Lately, she has been focusing on the main characters from Angels Blood (Elena and Raphael) and also taking you into the politics of their world. She has three characters left in the series to write about (including Archangel’s Viper Venom), this meant we should be expecting a big build up where character throughout all the books come together.

I am excited to see how she finishes up the series if it’s anything like the Psy-Changeling series it is going to be fanfreakentastic!!!

Firstly here is the synopsis of Archangel’s Viper:

Once a broken girl is known as Sorrow, Holly Chang now prowls the shadowy grey underground of the city for the angels. But it’s not her winged allies who make her a wanted woman—it’s the unknown power coursing through her veins. Brutalized by an insane archangel, she was left with the bloodlust of a vampire, the ability to mesmerize her prey, and a poisonous bite.

Now, someone has put a bounty on her head…

Venom is one of the Seven, Archangel Raphael’s private guard, and he’s as infuriating as he is seductive. A centuries-old vampire, his fangs dispense a poison deadlier than Holly’s. But even if Venom can protect Holly from those hunting her, he might not be able to save himself—because the strange, violent power inside Holly is awakening…

No one is safe.

I knew straight away that this would be a side story to the underlying plot of the whole Guild Hunter series. I get that when you do a lengthy series you want to incorporate side stories for some prominent characters so that others can learn about their history. What I found frustrating is that the supporting characters in this tale lack a little substance compared to the previous books, Nalini also linked previous books plot, i.e. we find out why Illium didn’t say goodbye to Aodhan.

There were a lot of pros and cons with this book, like how this book felt like a novella, not a novel *boo* But you got to see more of Dmitri *yay*. However, you ended up feeling like the connection between Holly and Venom took forever *awwww*.

I liked how you got to see and feel the structure of the seven and how Venom fitted into the picture. I also love how Nalini eluded to when Illuim becomes and archangel how it is going to break up the guard, because not only would Illium leave but Aodhan would go as his second also.

As always the dialogue was written beautifully, and some loose ends were tied up, though I have to say the this was probably one of my least favourite books from the Guild Hunter series. Considering that the only saving grace was learning about Venom’s background, it lacks the substance usually provided.

Overall an easy read, happy to see the direction she is heading in for all of the characters. Now if she could just hurry up and write Aodhan’s & Illium’s stories then I will be a happy chappy.